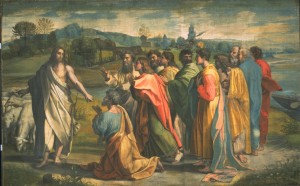 It is also a postscript to the greatest grudge match in art history: Raphael vs. Michelangelo. This conflict was bitter, at least on Michelangelo’s part. Years later, when Raphael (1483-1520) was long dead, Michelangelo (1475 – 1564) dismissed him with an angry phrase: “Everything he had in art, he had from me”.

He suspected that the commission for the Sistine Chapel ceiling had been suggested to Pope Julius II by the younger, ambitious Raphael and his ally the architect Bramante in an attempt to humiliate him. It turned out, of course, to be a triumph. But, from Michelangelo’s point of view a victory that caused a long defeat. 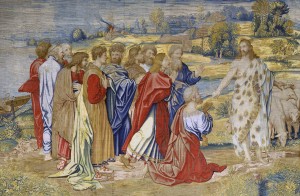 The commission for the ceiling diverted him from working on the massive sculptural project of the Pope’s tomb. In consequence, work for the tomb dragged on for decades, blighting Michelangelo’s life and causing him endless trouble and lasting regret.

This, in his mind at least, was all the result of intrigue by Raphael and Bramante. It rankled that that as soon as the Sistine ceiling was half finished, Raphael took a look at the heroic new painting style Michelangelo had devised – and did his best to copy it in the frescoes he was doing in the Pope’s apartments.

There was a temperamental clash between the two artists. Where Michelangelo was renowned for his terribilità: an untranslatable word suggesting formidable, awe-inspiring and alarming. Raphael – like Leonardo, for whom Michelangelo also had “the greatest disdain” – was noted for his “grazia” or grace. In other words, they were born courtiers, while Michelangelo had the reputation of being a prickly loner.

Perhaps that’s why when Julius II died in 1513 and was succeeded by the milder, music-loving Leo X, Michelangelo fell from favour and Raphael became the most prominent artist in Rome. Leo – second son of Lorenzo de’Medici – knew Michelangelo of old. They had almost been brought up together in the Medici household. Or whatever reason, Raphael was Leo’s favourite artist, and was loaded with commissions – among them, in 1515, the set of cartoons or full-scale designs, for sumptuous tapestries to hang in the Sistine Chapel on special occasions. 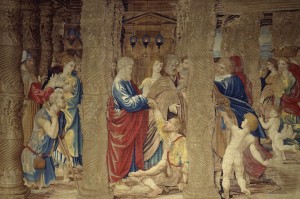 At this point, Michelangelo’s ceiling – finished in 1512 – was very new. Raphael knew his tapestries would be seen in direct comparison with that masterpiece. As was clear when I saw those tapestries hung in the chapel last July – for the first time in almost 30 years – he did his very best to compete. He didn’t win the contest, but together Michelangelo’s frescos and the tapestries dominated the space. The other, 15th century paintings on the Sistine walls – by Botticelli and other great masters – were hors de combat.

One other thing struck me. The lower right corner of Michelangelo’s Last Judgement – painted on the altar wall two decades later in 1535-41 – seemed to echo the tapestry hung on the wall at right-angles to it: The Conversation of St Paul. Both were dominated by swooping figures who seemed to be flying towards one another. More evidence that Michelangelo was still brooding about his long dead rival – or a sign perhaps of grudging respect.

One thought on “Original Raphael tapestries”