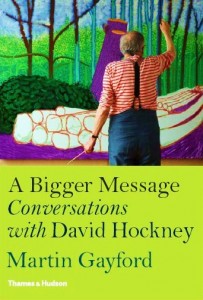 A Bigger Message: Conversations with David Hockney records the insights and ideas of a man described as the world’s most popular living painter in all their vigour, individuality and depth. It is a self-portrait in discussion, observation and reflection.

‘Seeing things’, for Hockney, is far more than a simple uptake of visual information: human beings exist in space and time and their reactions to what they see are both physical and profoundly emotional. The development of visual media from the cave wall at Lascaux to the iPad does not alter Hockney’s fundemental insight that – because of its very significance to the viewer – ‘depiction is always problematic’.

The conversations in A Bigger Message constantly address the problems and paradoxes of representing a three-dimensional world – a natural ‘infinity that we all feel’ – on a flat surface. Moving through the landscapes of California and Yorkshire, and taking in the broad sweep of art history from Caravaggio to Cartier-Bresson, A Bigger Message is a record of Hockney’s entire intellectual and artistic Odyssey so far – and a relevation of the pleasures of ‘just looking’ at the infinite natural beauty which surrounds us.

4 thoughts on “A Bigger Message: Conversations with David Hockney”