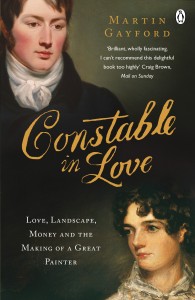 This book describes seven years in the life of the painter John Constable: from 1809 to 1816. The title has a double sense. On the one hand, it describes his intense and dogged feeling for landscape – especially that of his childhood and youth on the River Stour. It was during this period that Constable – relatively late in life – developed his individual style and began to make a reputation.

At the point at which the book begins he was a struggling unknown the rather advanced age of 36 (though from a family with some money). In these years he became the artist we know. Woven into the story of his growing power as a painter, and slow professional progress was his equally stubborn and prolonged wooing of his wife to be, Maria Bicknell.

Martin was on the BBC’s The One Show discussing John Constable with Gyles Brandreth.