On Sitting for a Portrait by Lucian Freud 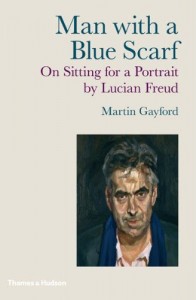 Man with a Blue Scarf is the history of a portrait, seen from the sitter’s point of view. It is a book not quite like any previously written: the inside story of how it feels to pose for a remarkable artist, and be transformed into a work of art.

Lucian Freud, widely regarded as the greatest figurative painter of our time, spent seven months painting a portrait of the art critic Martin Gayford. Freud, who was born in Berlin in 1922 and emigrated to Britain with his family in 1933, is an artist whose focus is on the individuality of everything – and above all of his human subjects.

This book takes the reader into that most private and intriguing place, the artist’s studio. the daily narrative conveys us to the heart of the working methods of this modern master – both technical and subtly psychological. From this emerges an understanding of what a portrait is – a work of art that grows out of the meeting of two individuals, artist and subject. But something else is also built up slowly, touch by touch: a portrait, in words, of Freud himself. this is not a biography, but a series of close-ups: the artist at work, and in conversation in restaurants, taxis and in his studio itself. It takes one into the company of the painter for whom Picasso, Giacometti and Francis Bacon were friends and contemporaries, as were writers such as George Orwell and W.H. Auden.
The book is illustrated with many of Lucian Freud’s other works from the 1940s to the present, among them an etching for which Gayford posed after the painting was completed. Many beautiful photographs taken by David Dawson of Freud at work are reproduced as well as images by the great artists of the past, such as Van Gogh and Titian, discussed by Freud with Gayford.